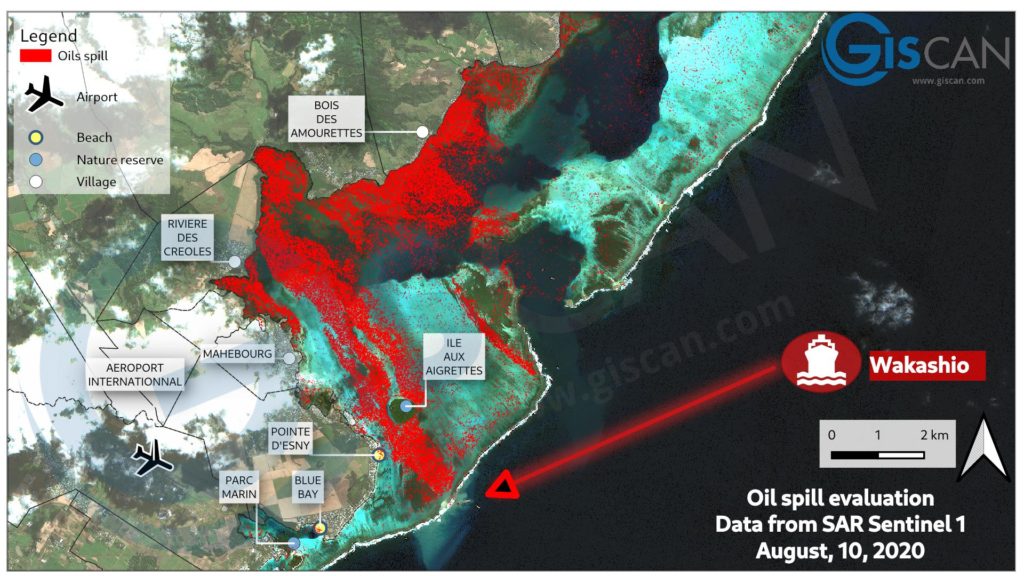 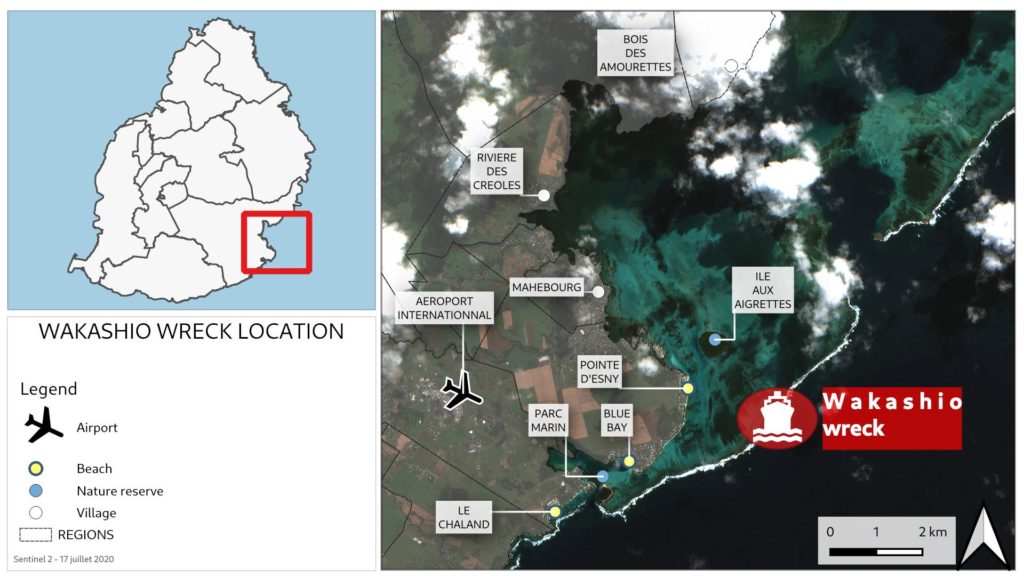 Monitoring from several satellite sources is a common practice. Various images of high resolution coming from sources such as the European Sentinel Mission (from the Copernicus program) are readily available. We have attempted to use images from various sources to do a retrospective of the shipwreck of MV Wakashio on the 29th of July to the 11th of August 2020.

July 25 – day of the shipwreck: 86% of the imagery is covered by clouds. In fact, it is impossible to perform an analysis on this image. As such, we move on to the next target (common term used in remote sensing): that of the 29th of July.

Note: The SAR (Synthetic Aperture Radar) image from July 29 shows the vessel’s bearing. July 31st: This new image is particularly interesting as it demonstrates the Wakashio in another trajectory from that of the 29th of July but we can also clearly distinguish the RGB (Red Green Blue) composition, an unbleached trail around the boat to the lagoon. 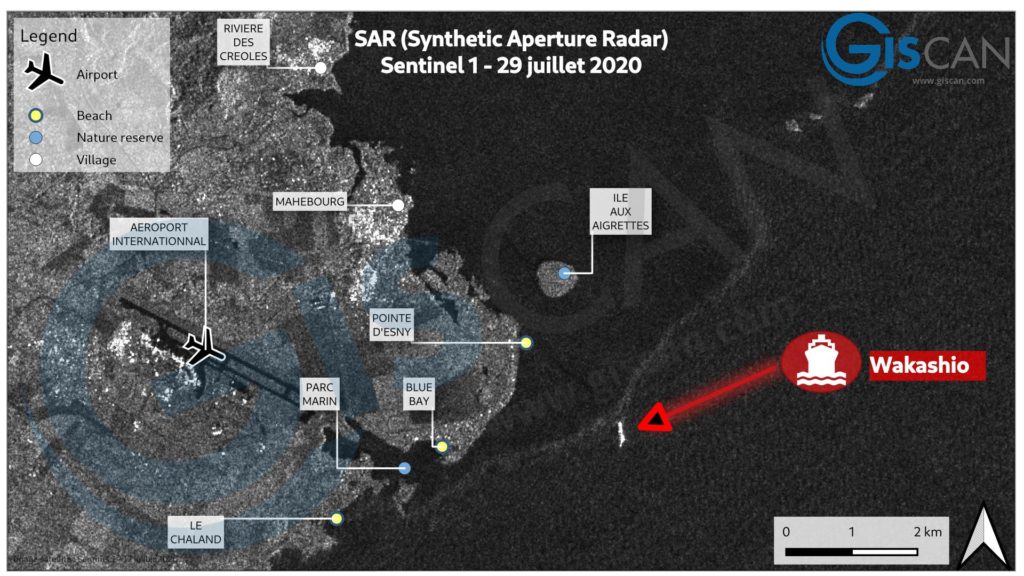 August 1st: The image shows a diffusion of a whitish streak. The image is not available for free and is a preview of a very high resolution (50 centimeter) satellite image that we did not acquire. 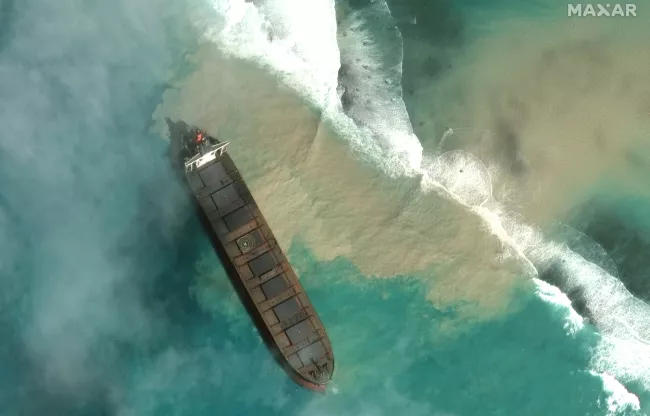 Our analysis of the image from the Sentinel 2 mission of July 31: Sentinel 2 produces images of 10m resolution. Having this type of data at this resolution is a great achievement. Sentinel 2 has a multi-spectral sensor with several bands in the visible and invisible light spectrum. This is its great advantage. In addition, the big added value of remote sensing is being able to create indices for the extraction of elements and analysis.

The Normalized Difference Water Index (NDWI)  was calculated from Geographic Information Systems (GIS) tools and open source remote sensing (Qgis, Grass and Orfeo toolbox among others). This index is commonly used to detect sand and as such is a clue for identifying non-water or non-vegetation elements. 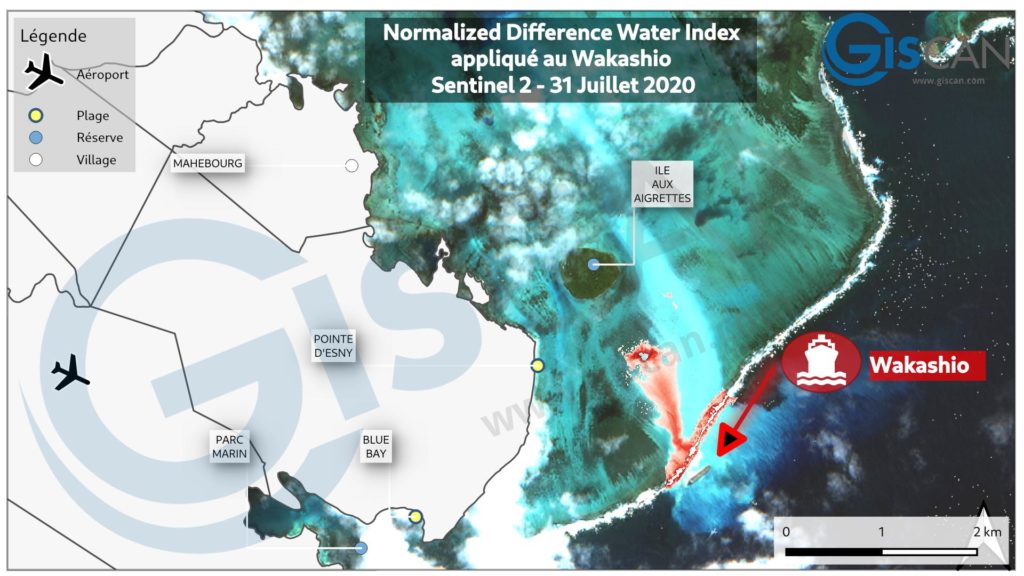 This analysis shows a plume around from the boat towards the lagoon. This plume is weaker than that visible on the RGB composition but the index makes it possible to identify a weak dilution with the lagoon water and a weak presence of vegetation. Therefore  we can imagine that these are corals that have been destroyed by the boat and propagated due to the current in the lagoon.

In fact, with the analysis being carried out using GIS , we can assess the impact and the size of the coral reef affected by this very high turbidity. 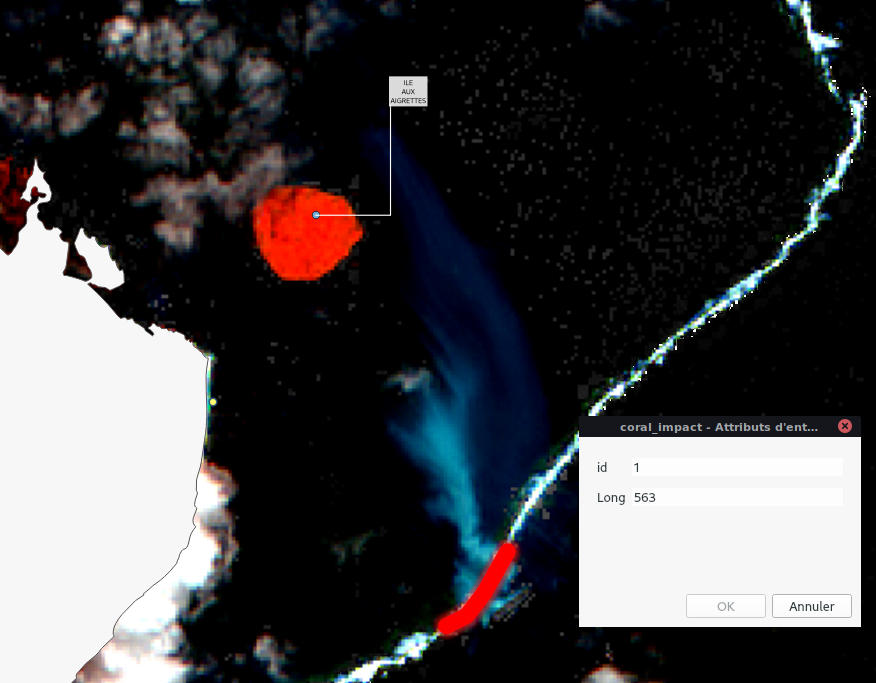 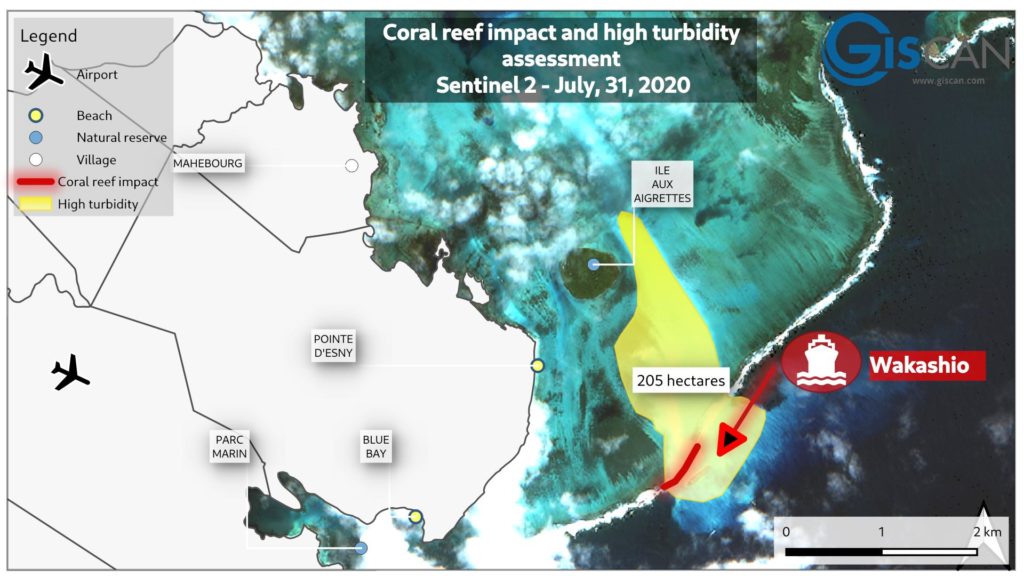 205 hectares were affected by the diffusion of the turbidity generated by the Wakashio on July 31, 2020. Since the data of August 1st was not acquired by us, the image shows a large non-quantifiable area ( it can however this can be estimated if the scene is purchased…) 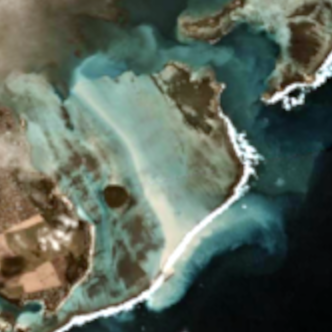 August 5th: This image (not acquired) shows a milky lagoon before the oil spill which was caused by the crack in the hull of the ship.

August 6th: The Wakashio is cracked and the heavy oil spill visible in the Sentinel 2 image has started. 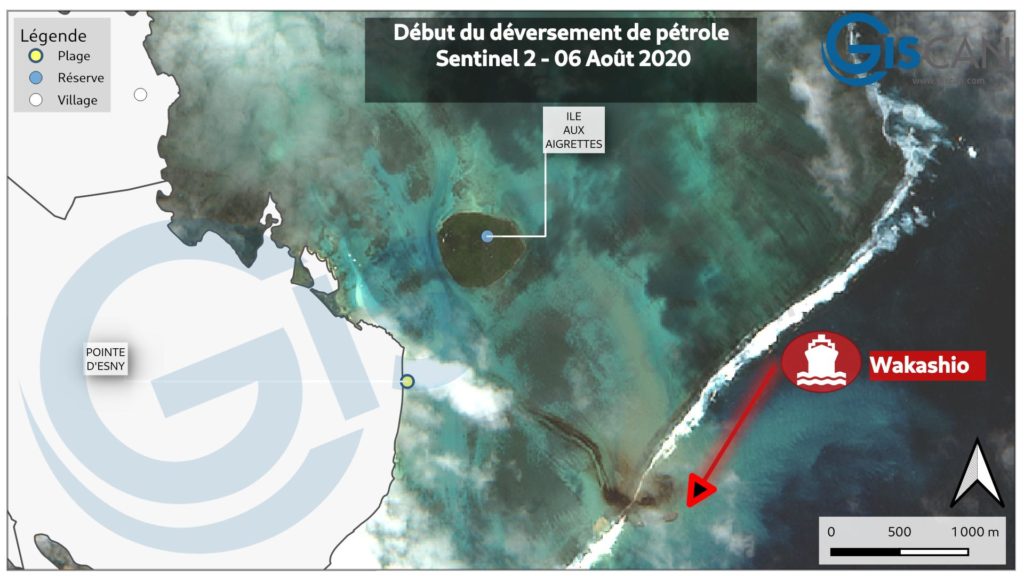 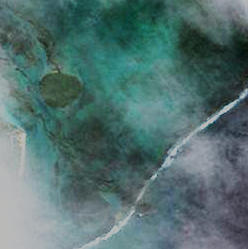 August 7th: The image from Worldview is difficult to discern (due to the clouds), however, the heavy oil can be seen spreading near the Wakashio

Images posted online by Maxar, allowing for more precise identification of the evacuations of Wakashio on August 7th

Worldview images of August 8th. Images for pansharpening treatment, while not very useful in analysis, we can still distinguish traces of oil.

August 8th: Glimpse of fuel oil on the image used for usual pansharpening.

August 9th: The image has too many clouds. Unsurprisingly, the heavy oil follows the same path as the whitish streaks seen previously. The south-easterly flow (trade winds) present in Mauritius corresponds, apart from local variations due to bathymetry and tides, to the displacement of sediments and heavy oil. This displacement is also visible on the France weather forecast:

August 10th : The SAR (Synthetic Aperture Radar image – Sentinel 1) shows the extent of the oil spill in the lagoon. The darker black colour represents the heavy oil spilled into the lagoon. 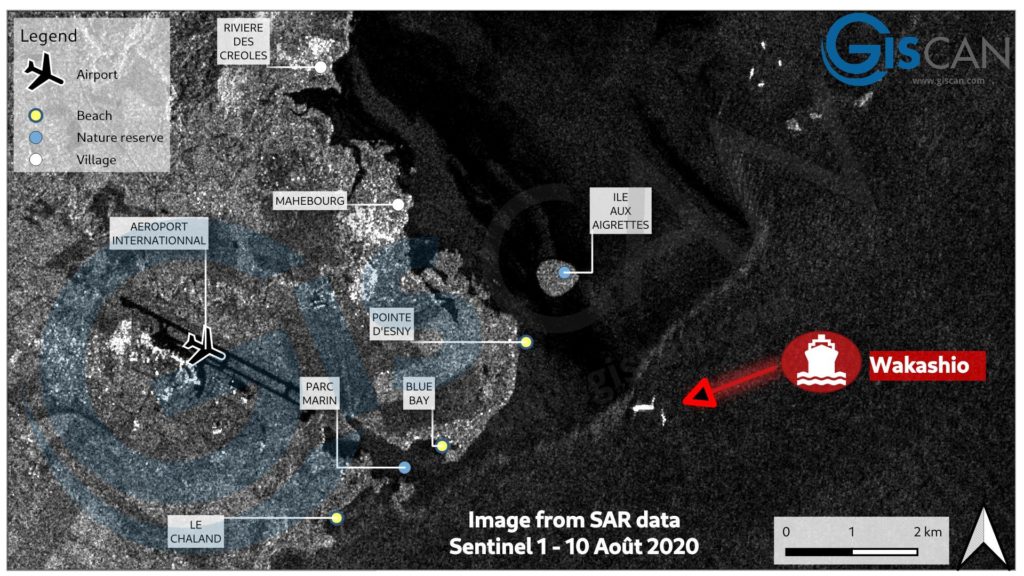 Note that while this image may seem alarmist, as it detects any release of oil, including that invisible to the naked eye, which could suggest that the water is clean. 2125 hectares covered with a film of (usually quite thin) oil 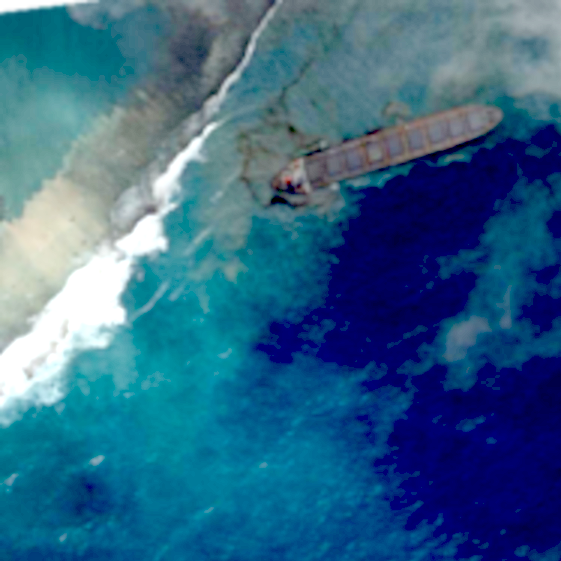 The Skysat image of the 10th of August shows that the Wakashio is leaning heavily backwards surrounded by fuel oil. August 11th: Very clear image of a cloudless lagoon, quite exceptional. 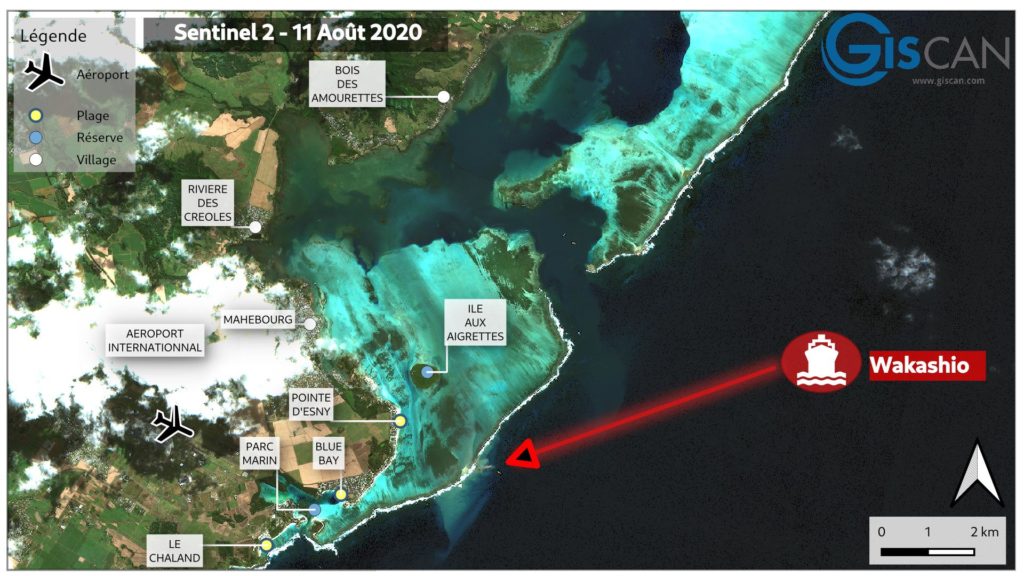 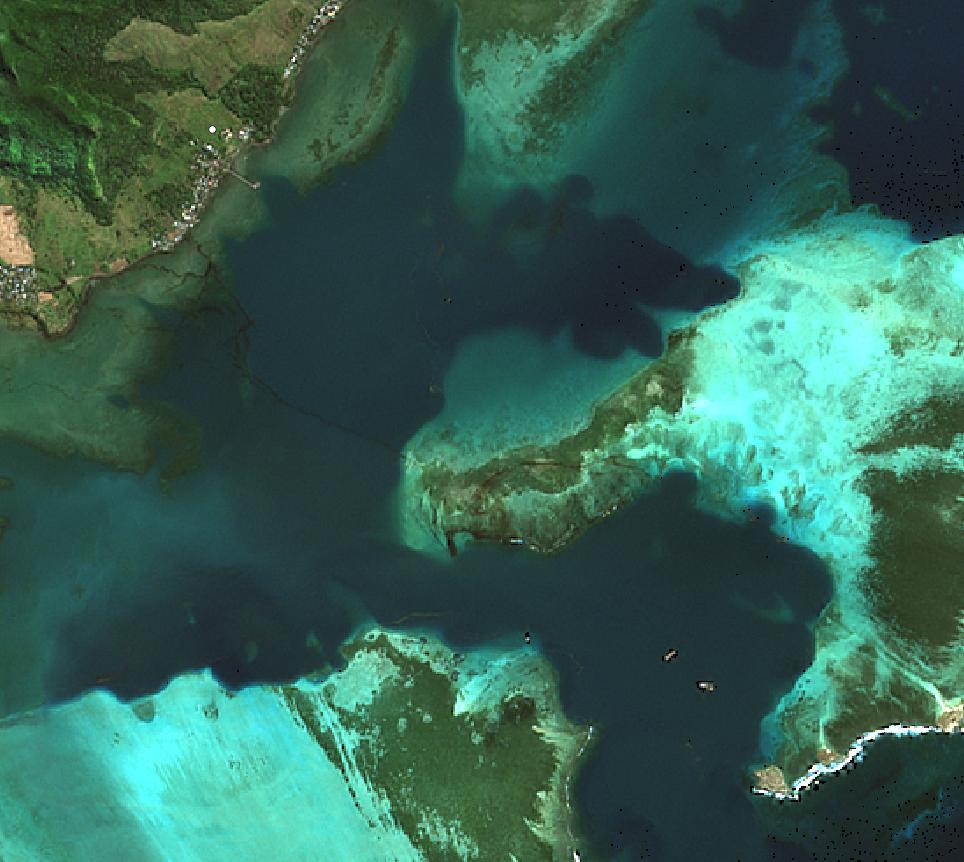 Note: We can analyze the image of August 11th or auto-detect petroleum or heavy oil with semi-automated analysis. Here’s a quick model: 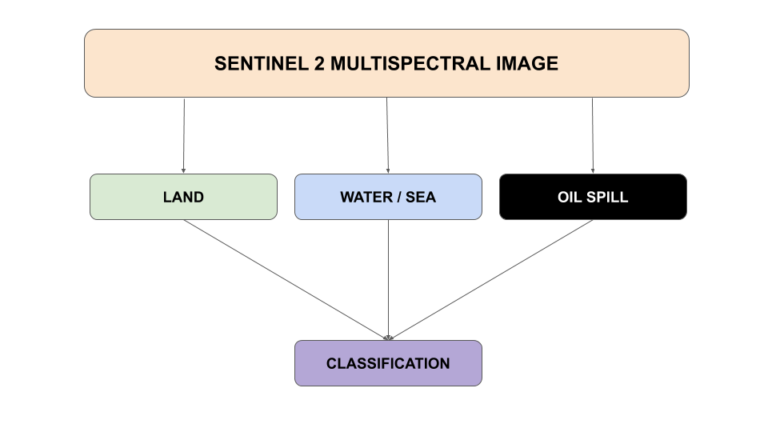 Here is the result which makes it possible to detect more or less dense variations in heavy oils or petroleum: 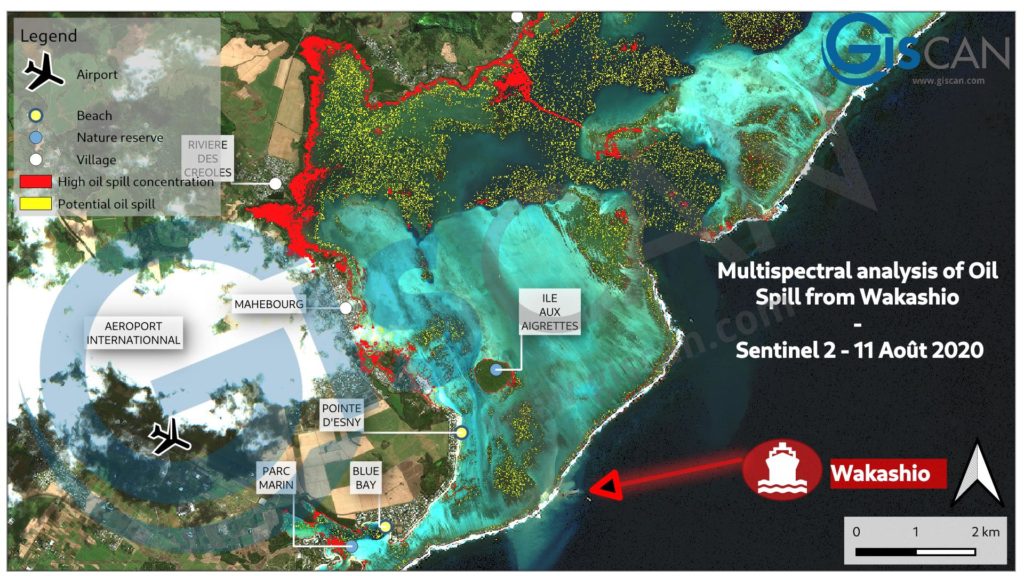 It is therefore possible to follow the evolution of a ship stranded on the coral reef and assess its short-term impact. The assessment presented here is rapid. Further assessment is possible with our multi-spectral drone. Apart from its quality of capturing high resolution images, the drone in a tropical environment makes it possible to overcome potentially present clouds. Thus, satellite image search was often subject to the presence of significant cloud cover.

In this unprecedented situation, the entire GISCAN team is mobilized to analyze the evolution of the situation.